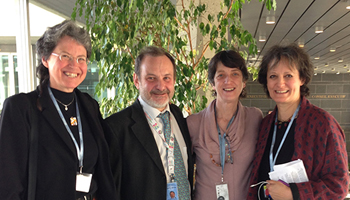 
Click HERE for the Press release from 19th January: GAIN, a wolf in sheep’s clothing, will try once again to enter WHO’s policy setting process


CLICK HERE for Times of India article: WHO accepts GAIN as NGO after it ends global food industry alliance


CLICK HERE for Nutraingedients article: GAIN gains NGO status from WHO after it severs big business ties (or does it?)

Following the EB 134, January 25th and the approval of IBFAN’s status as an NGO working in official relations with WHO.


WHO’s 134th Executive Board Meeting (EB) ended yesterday, after deciding not to grant the International Special Dietary Foods Industries (ISDI)1 status as an NGO working in official relations with WHO. ISDI represents the “global specialised nutrition industry” which includes the notoriously irresponsible baby feeding industry (including global giants Nestlé and Danone). The reason given by WHO’s Standing Committee on NGOs was that WHO had not “received the deliverables expected during the collaboration period.” 2


The application by the International Baby Food Action Network (IBFAN) 3 was approved, but in the absence of clear rules of engagement, so too was the Global Alliance for Improved Nutrition (GAIN), a public private hybrid entity with assets of $61million (largely due to funding from the Gates Foundation). 4 GAIN has a goal to: “reach 1.5 billion people with fortified foods…” and works to create markets for fortified processed foods by influencing legislation, global trading standards and public health policies, so its new NGO status with WHO is disturbing.


Because of inadequate implementation of WHO’s NGO policy in the past, ISDI and other industry groupings such as Croplife International (representing agri business) have managed to get official relations status with WHO, enabling them to make interventions – as NGOs – during meetings when WHO’s global public health policies are formulated. WHO’s current NGO policy explicitly defines NGOs as groups “free from concerns that are primarily of a commercial or profit-making nature.” 5 (See Note 1.)


During the EB debate on WHO’s Framework on Non State Actors on Wednesday, Dr. Chan, WHO’s Director General, said “we need to make sure there is no influence in the policy space that is countries’ prerogative, or in the technical standard setting space which is the second space. I call it the Red Lines. Two Red Lines. No industry. No Business Interest organisation or any organisations who want to influence the work of WHO to their benefit should be allowed in those two spaces”


Dr Francesco Branca, Director of WHO’s Department for Nutrition and Health Development, welcomed the news about IBFAN saying: “We have been allied with IBFAN for many years and we now look forward to strengthening WHO’s commitment on the goal of increasing exclusive breastfeeding, and scaling up implementation of the International Code.”


IBFAN has been the guardian of the International Code of Marketing of Breastmilk Substitutes, the world’s first global policy tool to protect children and families from irresponsible corporate marketing in violation of human rights, since it was adopted by the World Health Assembly, WHO’s Policy setting body, in 1981. Previously, IBFAN’s non-hierarchical network structure was difficult to accommodate under WHO’s format for official relations, so IBFAN participated as a member of Consumers International. While IBFAN’s acceptance may signal that WHO is now prepared to facilitate greater engagement at governance level with public interest networks and movements, GAIN’s acceptance is very worrying and highlights the fact that WHO’s safeguards against conflicts of interest are not yet in place. This is a point acknowledged by Dr Chan: “Yes, at this point in time we don’t yet have clarity on BINGOs [Business Interest NGOs] and PINGOs [Public Interest NGOs] but I did say that we’ll move towards that…”


GAIN failed to achieve NGO status last year, due to concern about “the nature and extent of the Alliance’s links with the global food industry” and its position in regard to “support and advocacy of WHO’s nutrition policies.” [See Note 2)


To increase its chances of success this time GAIN said that it had closed down its Business Alliance 6 in December 2013 that now its “main links with the private sector were with national and local companies.” The Standing Committee expressed concern that this closure “took place only very recently.”


GAIN is already on the Lead Group of the Scaling Up Nutrition Initiative (SUN), another public private hybrid entity, and the Business Alliance has been “folded into” a newly expanded SUN Business Network (SBN) of 40 global companies. The new SBN was launched at the Davos World Economic Forum on 23rd January 2014. Both GAIN and SUN encourage dealing with food and nutrition via Public Private Partnerships and Multi-Stakeholder Platforms, so it is hard to see what will actually change. (See Note 3)


This week, a GAIN sponsored Nutrition Hub was featured on the Guardian website. 7 This illustrated its hidden commercial purpose, with the headline: “Empowering pregnant women to seek out fortified foods.”


GAIN cleverly replaces “advertising to” with “empowering.” Such messages help create major market opportunities for the many companies who seek to undermine women’s confidence in breastfeeding and sustainable family foods.


While fortification can be important, it has to be done carefully in a regulated environment and does not undermine local food security. (see Note 4 ) Overlooked by GAIN is the World Health Assembly Resolution WHA 55.25 which URGES Member States, as a matter of urgency: “to ensure that the introduction of micronutrient interventions and the marketing of nutritional supplements do not replace, or undermine support for the sustainable practice of, exclusive breastfeeding and optimal complementary feeding.”


Patti Rundall, Co Chair of IBFAN’s Global Council, said, “We are really pleased that IBFAN now has official NGO status with WHO in its own right. We hope that the removal of this status from ISDI signals a turning point in the debate about how WHO will interact with commercial actors. But the decision on GAIN is worrying. If WHO is to fulfil its constitutional mandate it has to develop policies that address the complexity of today’s world and protect its independence, integrity in decision-making and trustworthiness. It must not fall into the trap of confusing the ‘not-for profit’ legal status with ‘not working in the interest of profit-making.’ There is a big difference between public-interest actors (who are guided by a public health mission) and those who follow the market profit-making logic (transnational corporations, corporate and venture philanthropic foundations, business associations and front groups, public-private partnerships and other hybrid entities). Identifying ISDI as a business front group is not difficult, but entities like GAIN that were set up to open up markets, but cleverly hide this true purpose, are trickier. I hope that Dr Chan stays true to her word and develops distinct policies that will keep the NGO ‘space’ for those whose only mission is public health.”


1 WHO has mapped the 187 entities listed as NGOs.8 Other industry groupings who have incorrectly gained NGO status with WHO include: Croplife International (representing Monsanto, Syngenta, Bayer, CropScience, Dow Agrosciences, DuPont and other companies promoting GMO technologies ) the International Federation of Pharmaceutical Manufactures and Associations, International Life Sciences Institute (representing Nestlé, Coca Cola, Kellogg, Pepsi, Monsanto, Ajinomoto, Danone, General Mills and others) and the Industry Council for Development (representing Nestlé, Mars, Unilever and Ajinomoto). All are guided by market profit-making logic (whose PRIMARY interest clashes with that of WHO). Their inclusion goes against WHO’s current NGO policy.


2 In 2012 GAIN was discovered to be pressuring the Kenyan government to weaken its draft law on baby food marketing In a Policy briefing, GAIN implied that proceeding with the law would threaten “Kenya’s ability to meet its commitments as a Scaling Up Nutrition (SUN) country.” The Kenyan Government was able to counter these threats and adopted the law without weakening it. The Head of Nutrition, Terry Wafwafa, later said that GAIN “came in as sheep and only later did we realise that we had welcomed wolves.”


3 “Announced today at the World Economic Forum in Davos, forty global companies have now joined together to take global action against malnutrition. These companies are committed to reaching over 127 million women and children with improved nutrition every year by 2020. Additionally, the group has committed to targeting 99 members by 2015 – ranging from global multinationals to local companies in SUN member countries.” http://www.gainhealth.org/press-releases/business-scales-action-combat-global-malnutrition


4 UN FAO convention on Food Aid Assistance or CLICK HERE While GAIN is not in the business of providing food aid, it is targeting the most vulnerable populations. Article 2 outlines UN general principles that parties should adhere to when providing food assistance. For example they should:


2a v ” provide assistance in such a way that does not adversely affect local food production, market conditions, marketing structures and commercial trade or the price of essential goods for vulnerable populations.


2b vi: “Ensure food aid is not used to promote the market development objectives of the Parties.” (article 2b vi).


1 ISDI represents 24 infant feeding associations and has had NGO status with WHO since 1984.


2 Report of the Standing Committee on Nongovernmental Organisations http://apps.who.int/gb/ebwha/pdf_files/EB134/B134_44-en.pdf


5 Criteria for the admission of NGOs into official relations with WHO WHO Basic Documents, 47th edition, 2009