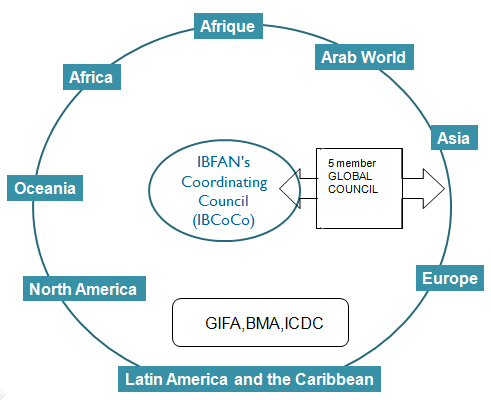 
IBFAN’s Coordinating Council (IBCoCo) is IBFAN’s highest Governing Body. IBCoCo is composed of the eight regional coordinators, of members of their regional Boards elected by regional assemblies, and of representatives of IBFAN’s four Global Programmes. IBCoCo meets every two years to set policy and strategic priorities, plan coordinated action, and discuss administrative and financial matters. In the interim between the IBCoCo meetings, the IBFAN Global Council (G5) of elected representatives follows up on the IBCoCo decisions. G5 meets periodically by Skype and forwards minutes of meeting to IBCoCo.


IBCoCo met in Johannesburg, South Africa, in December 2016 and elected a new G5 comprising of  five representatives as follows:


IBFAN’s principles for avoidance of conflicts of interest


The participating public interest NGOs bring particular value-added to the gBICS through their firm stand on the need to avoid or adequately manage conflicts of interest.The influence of the baby food industry in research, the medical profession and in policy-setting is pervasive, both through direct sponsorship and  through Public-Private for profit Partnerships (PPfpPs).


In line with its 7 Principles, IBFAN does not seek or accept funds, donations, gifts or sponsorship from manufacturers or distributors (or their trusts or foundations) of infant and young child feeding and related products.   more