IBFAN is pleased to announce that it has been awarded the 1998 Right Livelihood Award (RLA). The Award, commonly known as the “Alternative Nobel Prize”, was presented recently in Stockholm, Sweden. IBFAN shares the award with a Chilean activist, an American environmentalist and two peace workers from the war-torn Balkans. 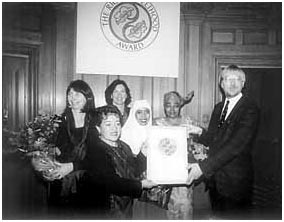 Established in 1980 by Jacob von Uexkull, a Swedish-German writer, philatelic expert, and former member of the European Parliament, the RLA recognizes groups and individuals for their “vision and work contributing to making life more whole, healing our planet and uplifting humanity.” The RLA is presented annually in the Swedish Parliament and according to the United Nations Development Forum is “Among the world’s most prestigious awards.”


IBFAN wishes to thank its funders and many supporters around the world and wants to share this honour with the thousands of committed individuals who work to defend every mother’s right to breastfeed and every child’s right to be breastfed.


The RLA Jury has honoured IBFAN “for its committed and effective campaigning over nearly twenty years for the rights of mothers to choose to breastfeed their babies, in the full knowledge of the health benefits of breastmilk, and free from the commercial pressure and misinformation with which companies promote breastmilk substitutes.” The RLA calls on governments everywhere to legislate according to the World Health Organisation’s International Code of Marketing of Breast-milk Substitutes, and challenges the companies which continue to break and bend the Code to put the health and lives of babies before their profits.


“IBFAN’s untiring efforts in the promotion, protection and support of breastfeeding have been an important contribution to infant and young child health and survival. In addition, the organization’s constant monitoring of company compliance with the International Code of Marketing of Breast-milk Substitutes indicates that much remains to be done to protect parents and health professionals from commercial pressures to feed infants artificially.”


“Congratulations! It has been a joy to be a part of the IBFAN family…”


Eveline Herfkens, The Minister for Development Co-operation, the Netherlands,


“I send you my sincerest congratulations with this award. The ‘Alternative Nobel Prize’ is a recognition of your work and I want to join in this recognition of your committed efforts to work for the rights of mothers, for healthy growth and development of infants, for improved health of children and women. … I will continue to enhance and facilitate your activities as one of the challenges to improve the health of children and women.